Dane Batty, the author of Wanted:  Gentleman Bank Robber: The true story of Leslie Ibsen Rogge, one of the FBI’s most elusive criminals, reached out to me to ask if I would do a review of his book.  I get these from time-to-time and try not to pass up the chance.  I wasn’t disappointed. 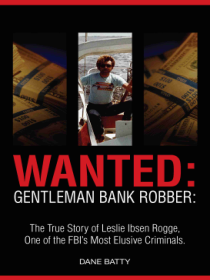 This book is a trade paperback book from Nish Publishing Company and from what I can see, this is Dane’s first book.  Sometimes this throws up some red flags.  Adding to this, he is the nephew of the subject of the book.  My apprehension level was pretty high as you can imagine.


Most true crime books are about murders and they have a pattern of sorts.  You start with the crime itself – usually with a scene of brutality to pull in the readers.  Then there is the search for the killer, the capture, the trial (if there is one) and the closure.  I’m not knocking this genre, I write in it myself.  The pattern is one that should be familiar to most readers of true crime.


This book is different though.  It is not about a murderer or serial killer, but a bank robber.  Batty starts out with a robbery, enough to whet our appetites, the pulls us into the story itself.


The book is written in two voices, the author (Batty) and that of Leslie Rogge outlining his robbing lifestyle.  I was a little torn on the writing at first.  Rogge doesn’t give any context to his crimes, he tends to write what he was thinking, what he saw, and what he did.  We don’t get the usual flavor for the scenes that a polished professional writer provides.  Batty’s sections are fairly small and he misses a chance to provide some context and detail that would have enhanced the story.  That was my only disappointment with the book, and it is one I found myself moving past.


This is the story of how a man traveled around the country (and the world) robbing banks.  He was not a violent robber.  His style was subdued and not severely threatening.  Rogge would wear a suit into the bank and carry a briefcase with a police scanner.  He would schedule a meeting with the bank manager and rob the vault quickly without a lot of panic or grandstanding.


What the reader gets in this book is a blueprint on robbing a bank in the 1980’s and 90’s.  Rogge is not a likeable character at all.  He seems almost sociopathic, not caring about the terror he inflicted on others.  People took him in to help him when he was down and his pattern was to turn and take advantage of them, often robbing them as well.  There isn’t a hint of remorse on his part for what he did or the consequences of his activities.  My aunt and cousin work in banks that have been robbed and trust me, it does emotionally traumatize people to go through it.  Rogge commits this crime with wild abandon and seems to think it was fun.  The fact that he showed a weapon to people and threatened to turn the robbery into a homicide doesn’t seem to faze him in the least.


Rogge’s family was under constant surveillance by the police who were hunting him down, but Rogge does not seem to care.  For him the world was a playground where he took advantage of the people and situations around him without a second thought.  At one point I put down the book and realized that he had his girlfriend and her young boy with him while he’s fleeing the FBI dragnet and continuing to rob banks.  Yet from his own words, he never seems to give that any thought.


And yet, I couldn’t put this book down!


I wanted to hate Rogge, but found myself fascinated with his lack of guilt for his actions and the way he planned his robberies.  This book puts you in the mind of a professional bank robber, a man who did it often and got away with incredible amounts of money.  It disturbed me that people like him walked the planet…but at the same time I had to keep reading.  There was no one in the book I was championing, not a single law enforcement officer was interviewed for the book.  As much as you end up disliking Rogge, you keep reading to see just what he’ll do next.


With all respect to the author, I don’t think that Rogge was a “gentleman robber.”  However reading about him exposes a character unlike any I have read about in recent years – a man devoid of care about others.  Someone could get their doctorate degree by writing a paper about the quirks of his personality.  Dane Batty’s brought us a good tale here and you should pick it up.  Wanted is not your typical true crime fare.  Despite its weaknesses, I found myself driven to finish it and I think you will too.  Pick it up and be prepared to enter a world that few of us ever see or can even comprehend – the mind of a serial bank robber.  You will never enter a bank again and not look around at the patrons and wonder what is really going on, wondering if that man sitting at the manager’s desk is actually robbing the bank.