The Advanced Rules for Sails of Glory – Another Sneak Peek! 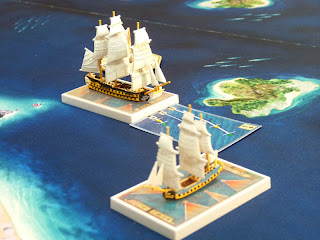 I played the basic game two weeks ago and loved it.  The game was quick to learn (15 minutes or so) and really played fast.  For non-wargamers or folks who don’t like games like Advanced Squad Leader (old school) that required a binder for rules – this was a great little sailing combat game.  I like it because in just a couple of years, I can get my grandson to play with me.

The folks over at Ares slid me a copy of the draft Advanced Rules.  All I can say is – wow! For those of you that were worried that this naval combat game lacked the kind of sophistication you wanted; perish the thought!  I took the time to do a quick run-through with two ships.  Here’s the changes with the advanced game.

One:  Planning.  In the basic game you pick your maneuver card and execute.  In the advanced game the combination of the wind and the hourglasses on the card determine when you execute your maneuver.  Suddenly more defined tactics emerged.  Where before I was thinking, “hard to starboard,” now I had to contemplate when I wanted to make that turn.

Two:  More fun with guns.  You get grapeshot and chains-shot here and optional rules for double-balls.  The twist here is that these have different ranges and different damage counters.  Chain shot is nasty against sails.  Grapeshot whittles away at crew.  I like how Ares had done this.  They haven’t create a lot of clumsy written rules, they  have a fairly standard approach and players simply use a different set of counters to pull for the damage.

Three:  Sails!  In the basic game you ignore your sails.  Here in the advanced rules, masts can be shattered and your need to manage your sails.  These control your speed (via the cards) and really allow the intricate moves you’re going to need to edge in close and prepare your boarding party.
Four:  Damage gets nastier.  You can get a hole and start taking on water!  Don’t worry, you can have your crew pump it – but still, now you get a sense of realism.  Your sails can be damaged, your mast broken, and your rudder damaged.  Did I mention you can catch on fire?  I also noticed in the rules they sent me a tweak on raking fire which I found lacking in the basic game – thank you folks at Ares!

Five:  Boarding parties.  In the basic game you have rules for musketry but the range is so short with muskets that they don’t really factor in much.  I assumed that boarding parties would really factor in the crew slots a lot more.  In the draft (stress draft) rules provided, the crew slots don’t factor in much in boarding actions.  This was a little disappointing.  In my one-on-one battle, just getting in close enough to board allowed musketry fire to whittle away one of the ship’s crew.  When we boarded however, that ship, despite the loss of crew, was victorious.  That seemed a little too simple for me.  I’m counting on the good folks at Ares to make some modifications before these go to press.

So what is my summary?  Remember – these rules are draft and subject to change.  What I found was a lot of sophistication with the advanced rules.  This goes from a “beer and pretzels” (basic) game to a true wargame.  Digesting the advanced rules takes a little longer but it makes the game really shine.  This is a game that is built on a very solid foundation just like Wings of Glory.  I give it five stars and I want my production copy NOW!!!   If you want the ultra-short version I’ll stick with, “This is Master and Commander on steroids.”
Posted by bpardoe870 at 7:19 AM